Say Hello to the New Boss…Google + is Here to Stay

In this article you will learn

— Why Google + is important to online marketing

— A basic tutorial of Google +

I don’t really have to convince you that Google + marketing is a good idea, do I? What’s that? I do?

Unless you’ve been summering with your crazy uncle Lenny in Iowa, watching the world pass by while you wait with a shotgun on your lap for the black U.N. helicopters to take your corn away, you’ve heard of the new social media giant: Google +. Gigantic because it has the full weight of Google behind it. And guess what? Google plays dirty. Here are the main reasons why you want Google + in your online marketing strategy:

It dominates Google search engine results pages like never before: Google + is a direct play at the social media space and marks the opening of a new front in their ongoing war with Facebook. But Google couldn’t hope to beat Facebook in the social media space head-on, so instead they leveraged their core strength: Search. The reason Google + is so awesome is that it is rocket fuel to your search engine strategy.

Google even changed their algorithm for this pet social media project. An algorithmic update called SPYW (search plus your world) was launched on January 8th, 2012. SPYW now features personalized search results, all predicated on your Google + connections.

SPYW, the bannerman of Google +, has been an incredibly aggressive classifier, permanently altering the search engine results pages (SERPs) for both users who have logged in or not logged in to their Google accounts.

Here are some screenshots of SPYW results pages. 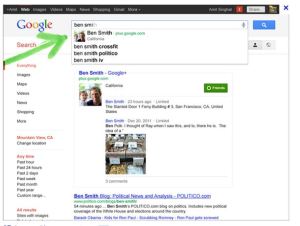 There’s a lotta Ben Smiths out there. Which one do you think gets the most traffic to his site?

The “+1” popularity of your site is seen from the search engine results pages. Unlike the number of Facebook likes, or Twitter followers, Google + has a direct relationship to click-through rate from the search engines because users can see how many +1s you got for your site. It stands to be reasoned that a site with thousands of +1s may get more clicks than a site with none.

Every time you add someone to your network, the stuff you +1 will climb up their search engine results too. This feature is almost annoying to some people and yet most fail to turn it off anyway. Anyone in your network is more likely to see content you +1’d than not. Ergo, +1 your own stuff and watch the exposure sky-rocket. This leads me to my next point, which is

You can rank on keywords that would otherwise be out of your grasp. If you sell used cars you might think that the keyword “used cars” is so far out of your reach that it’s not even worth pursuing. But with search plus your world you can rank right at the top, along with a colorful photo of yourself and some info about your company, for ANY keyword…the catch being that you will show up only to people within your network. That’s easy enough. Just grow your network and dominate SERP by SERP.

The richness of the snippet. 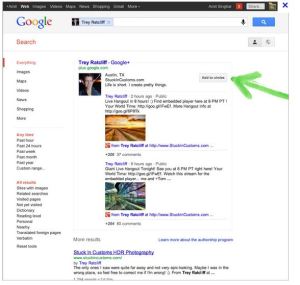 Look at how rich the box that Google allots for you is. There is so much space in there for images and text, you can sell your site before users ever even click on it. The average site gets almost 20 times as many impressions as it does clicks and you can maximize brand impressions with Google+. The internal profile is also very rich, with tons of images, outbound links to your sites and other content, and a lot of text.

+1s have become the most significant ranking factor. If you are still not convinced, know that +1s have become a ranking impact factor. According to the Moz 2013 Search Engine Ranking Impact Factor study, the one that correlates most significantly with a page one position on Google. That’s right, if you have more of these little +1s you rank higher not only on personalized search but on general search as well, for people outside of your network.  Also note that Google is becoming increasingly discriminatory and callous in its routine replacement of more legitimate, even better, search engine results in favor of its own +1-powered results.

It’s a lot easier to add connections on Google + than any other network. People who struggle to add Twitter followers or Facebook likes will find that Google+ makes it incredibly easy to simply jump into circles at will. You will get thousands of people in your circle very quickly.

And now, here’s your… 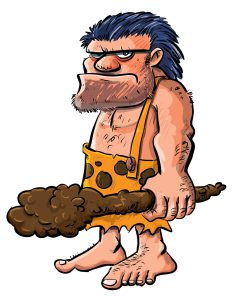 Here’s a quick breakdown of the features. 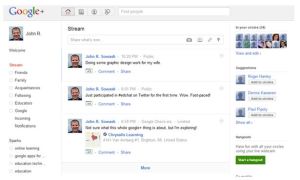 This is the central hub of Google +. In the left-hand sidebar you see filters. You can filter whose streams you see, by categories like “friends,” “family,” “acquaintances,” and others. In the middle is the stream. Similar to Facebook. 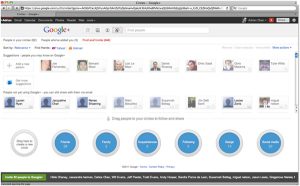 Google + is all about circles. Your goal is to add as many people to your circle as possible and jump into as many circles of others as possible. 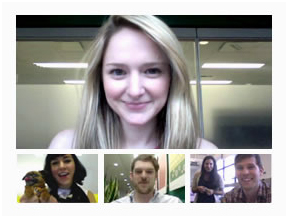 Thought I doubt this will be a huge part of your marketing strategy, you should know that Google + hang outs gives you multi-user video chat functionality. The same one that Skype charges $10/month for (bested again, Microsoft!) Once you start a hang-out, up to 10 people can join. Everyone gets alerted in the target circle though so considered yourself warned! This is a nice way to reach out to people and do short, informal webinars.

Sparks is a recency-based search engine built into Google +. It updates much quicker than the regular Google search engine results pages. They are meant to be watched, shared and enjoyed. 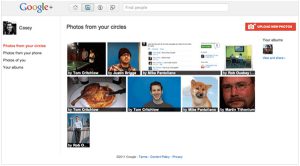 Just like with Facebook, a key way to hit your audience is through photos. Get some neat photos relevant to your business and get to sharing! 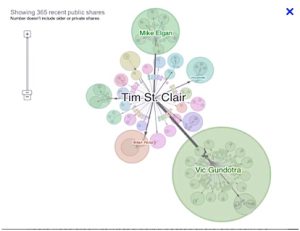 Ripples are a type of analytics for Google +. With each post you make you can open a drop down menu and check its “ripple effect,” or how many people it touched. This lets you see who shared your content and quickly lets you identify influencers in the niche.

Although the brute strength with which Google has shoved this social media platform down our throats is resented, and the relative difficulty of the interface relative to Facebook has yielded complaints, it is clear that Google has made us an offer we can’t refuse. If you haven’t done so already, cross over to Google + immediately and enjoy the immense benefits it has to offer.