8 Marketing Truths You Learned Too Late 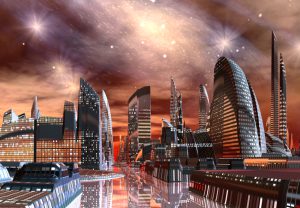 Ah…the bitter dregs of regret. Who among us hasn’t heard a marketing horror story? Whether you fail to perform the proper research, hire the right people, or pursue the correct advertising channels, nothing else shakes a company’s morale like a massive advertising failure. Today, we throw in our 2 cents and share some basic truths about marketing failure. All examples are informed by real life situations and people we have talked to or worked with. We took about 20 case studies and boiled them down to these few, basic rules. Enjoy and don’t let yourself become the victim of a bad marketing decision ever again!

Truth #1: In the end, only UX matters

Nothing is more important than user experience, abbreviated as UX. With any design change, any marketing idea, the user should always come first. This is easy to grasp in an abstract way and yet, it always gets cast aside as self-interest inevitably takes over.

The process of optimizing for UX starts with asking a basic question: “If I was the user, what is the best possible outcome for me after visiting this site?”

What does the user gain? Do they leave with some knowledge, some free material? Do they have fun? Have they met someone? How is their life better after having visited your site?

Guiding this approach is “the power of free.” Giving away things for free can have a powerful impact. Some examples of services which were free in their beta versions (and beyond) are Pandora, Spotify, Google, Skype, YouTube, Hulu, iTunes, and others. Each of these are run by incredibly successful companies: Hulu is owned by Fox News. iTunes by Apple. Skype by Microsoft. The marketing people at these companies determined going free was the best way forward, probably after hundreds of thousands of dollars worth of research. Save yourself some money and follow in their footsteps.

Going free will generate a huge following and lots of users. After you get that following, then you can monetize in a number of ways, with ads, affiliations, extra offers, expert content and other means. You can even start charging for stuff that you used to give away for free.

You might find yourself saying, “Hey, there’s nothing that I really CAN give away for free.” That might seem to be true, but only at first. We have worked with some companies that were sooo sure they couldn’t implement a successful free offering. For example, one of our clients constructs custom wine cellars. “What are we going to do?” they asked me, “Start a contest and give away free wine cellars?”

We ended up building them a custom r-value calculator. This let do-it-yourselfer winos calculate the r-value (insulation needed) for their wine cellar. It took variables such as soil temperature, cellar location. Geographic area, type of wines stored, thickness of walls, etc, and then spit out the type of wallboard (insulation) users need to buy at Home Depot to make an awesome wine cellar. Pretty simple, right? And yet it’s the only calculator of its kind and has gotten them TONS of deals, since many people start off as do-it-yourselfers, figure out how hard it is, and then end up calling them for tips anyway.

UX ought to drive everything. Here are some typical scenarios I see where our customers lose their way:

We once worked for a debt settlement company which epitomized this approach. We wanted to post funny, non-linear things on their Facebook wall. Stuff real people would appreciate. But they just wanted us to post things like “20% off initial enrollment if you enroll a friend.” After 4 months, it was clear it wasn’t working. Then, we told them they should just take the entire social media budget that month and spend them on Starbucks cards to randomly give away. The ROI on that was MUCH, much bigger.  We got 3K extra likes and even made 2 enrollments off it (each enrollment netted us about $5K).

A lot of times a client will say “this is just the best we can do with the current budget.” Or “we need to start somewhere.” Of course, budget is a real concern. But you only get one chance to launch. Just one. One first impression. If your site is designed to help you rather than to help the user, then forget it. Hold off until you are ready to do things right. Incidentally, this brings me to my second truth,

Truth #2: Do it with the right budget, or don’t do it at all

Simply put, this is what I mean: If you’re going to do something, make it the best you can do. If you can’t do the best, do something else instead. There are tons of great marketing channels. If you don’t have the budget to execute a campaign in one channel perfectly, then pursue another channel.

We have a lot of customers who decide they need SEO, and they set aside $500/month for it. That’s about enough to get them the $499/month SEO “Gold Package” from whichever bottom-feeding SEO firm they happen to contact first. It’s not a real play at the online space in which they’re operating. They’d be so much better off spending that same money in pay-per-click ads, or social media, or even just on sending a single dollar bill to each of their former customers as a way of saying thanks. How can you not go back to a business that sent you a dollar in the mail? Take a look at your budget and make sure that whatever you do is done beautifully and memorably. Don’t take shortcuts and hope they work out ok, because they will work out simply “ok…” i.e. so-so, mediocre, and in a way that is not aligned with your true business goals.

The biggest mistake is to structure a campaign around assumptions predicated on demographics or psychographics. That’s because people are more than just their demographic/psychographic and they don’t appreciate being boxed in. The best example of this is the Motrin Moms campaign launched by Johnson & Johnson in 2008 to promote Motrin. Johnson and Johnson figured out that their top customers are moms between the ages of 25-55. So they created a campaign called Motrin Moms.

The reaction to this attempt to segregate by demographic was instant and venomous. Everyone hated it. It caused an overnight, drastic drop in sales. Women and men alike were offended by the company’s gall.

Instead of stereotyping, just TEST, TEST, TEST. If your primary audience is men between the ages of 18-25, don’t just put up pictures of girls and fast cars. Instead, try multiple tests to see which type of collateral your users respond to best. Do not assume you know people.

Truth #4: If most people you know aren’t madly in love with your idea, it’s probably not that cool

This is a hard truth to swallow, especially since advertising is so subjective. But good collateral does have semi-universal appeal. Don’t ever accept a website, design, or marketing idea just on the suggestion of your marketing provider, in-house team, or your personal hunches about what is going to be good. You need to open it up to the scrutiny of *gasp* others! Take your design around and show it to friends, colleagues, family members and strangers. See what people have to say. A good idea will hit home immediately. Of course, just because you get a few negative comments doesn’t mean that the idea should be dropped but a focus group will give you valuable insights prior to launch.

And don’t just focus group it offline. Go on forums, seek out professional communities of marketers and social media personnel and see what they have to say about your idea. Don’t worry about someone stealing it. Unless you really did stumble on the next paradigm-shifting marketing secret, no one will bring your idea to market before you.

Truth #5: Anything that can be tested, should be

I’m sure your opinions are brilliant. And that the opinions of your staff or marketing people are great as well. But the fact is that your opinions, no matter how awesome, are statistically insignificant. You are at least a couple of sigma deviated from the norm. Your staff is probably even more “deviated” than you are. In other words, what you think doesn’t REALLY matter. It’s what the crowd thinks that counts. Ergo, everything must be tested.

A lot of so-called “awesome ideas” are developed in a vacuum. I knew someone who was willing to pay $10K for a “virtual avatar,” only to find out that SitePal licenses out the exact same thing for $10/month. Incredible. Everything has to be thoroughly researched before execution. Don’t just Google it. Figure out every term that might yield to internet evidence of this idea’s prior existence and search those. Find clues. Follow up on leads, call people. See what other marketing firms or individuals have to say about this concept. Do the research very thoroughly. A few hours of Google research and phone calls could save you thousands of dollars. Well worth your while.

KPIs are the way we measure success in marketing. A lot of people set sales or revenue as their KPI in the first 8 months of a marketing campaign. This is a big mistake. Depending on your industry, your sales cycle might be much longer, even if it doesn’t seem that way. For example, let’s take the case of an auto-body shop we worked for in Redwood City. We decided to do a campaign promoting oil changes so we can get people in the door. The guy at the shop naturally said, “if you can get me 10 oil changes this month, I will double your budget.” But this showed complete ignorance of his own conversion funnel. People generally get a few oil changes a year, at best. So the sales cycle is quite long. In his case, this is what the conversion funnel ended up looking like. 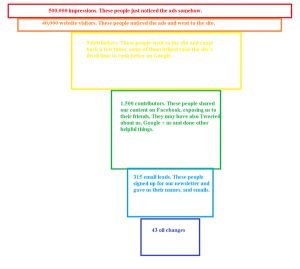 He only cared about the last KPI, the 43 oil changes. But the 43 oil change people had to come from that red box, of 500,000 impressions, a KPI he didn’t KNOW or care about. And it took about 7 months for the people from the red box to become the people in the dark blue box (the oil change people). The chance of a user getting deeper and deeper into the conversion funnel got higher with time they heard more about us, saw our stuff online, got out of the habit of going to their old mechanic, and finally tried an oil change. It takes time, so make sure your first-year KPIs are realistic.

Truth #8: The right approach won’t fit onto a bumper sticker

No single approach works best whereas a smart combination usually will. You should cast your nets wide, see which ones come back best-laden, and then focus on that channel. Start off with SEO, social media, PPC, Facebook ads, offline marketing, telemarketing, everything you can and see what works best. It’s the only logical thing to do.